Why I use my bank's mobile site on my desktop

(or, cutting out bloat by using a platform where bloat won't fly)

Let me start off by saying I'm generally a huge fan of my bank, USAA. Their offerings are free of hidden fees, their phone support excellent, and the perks they provide are competitive. They don't have the best savings interest rates, but you can always find a better deal online to park money not actively in your checking account.

It is frequently buggy; whenever I log in via Google Chrome on Ubuntu 12.04 I land on a page with a URL beginning with "https://www.usaa.com/inet/gas_bank/AccountBannerAjax" and a bunch of GET parameters like "currentaccountkey" and "accnumber" with values like "encrypted12a1f4dd1[…]". The server returns a 200 OK, promises a Content-Length of 20, but then actually returns zero bytes. After navigating to the homepage and clicking a button, I end up getting logged in, but I wonder what percentage of their userbase are experiencing this problem?

For some strange reason, I get a lot of checks. It appears that nobody else informed the banking system that it's 2013, and the easiest mechanism for people to send money without paying fees is still on paper. To its credit, USAA made remote deposit of checks available to all customers in 2006, when it was mostly an offering limited to businesses. However, it seems like they haven't updated their web workflow since then.

Using it on the web still requires using a signed Java applet (itself discouraged by CMU's CERT) that does the incredibly complex task of… letting you select a file from your computer and upload it to their servers. At least, that's what I think it does, because any time I chose "Run", my browser complained a few minutes later that the tab had stopped responding. Regardless of functionality, you can accomplish almost anything their site could currently be doing with HTML5 and a third party service if they want to crop images locally.

USAA's mobile app for Android has another host of problems; I haven't been able to log into it for 2 weeks, and when I chatted with someone today I was told they were "doing some maintenance this weekend", so I should try again in a few hours once that's finished.

I googled around a bit for some way to perhaps make the applet work in Ubuntu (which admittedly is not a supported platform), and came upon a Facebook thread where a rep suggested using the mobile web site.

I loaded it in my browser, and was amazed at how well it functioned. Obviously designed for higher-end devices (It didn't even load in one WAP emulator I tried), the mobile web interface was a refreshing breath of fresh air. It scaled well to a full-screen device (see below), loaded quickly, and gave me all the information I would have wanted out of the normal web interface.

Most notably: remember the whole "upload a check" workflow that required a buggy Java applet on the main website? We get bog-standard HTML form fields, no additional magic. There goes any theories about the Java client doing some magic validation or prep of the image; here, all they're getting is the images and my session cookie. 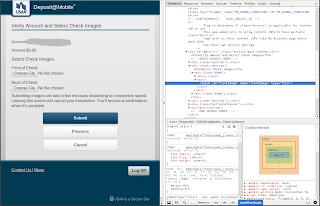 I'm still shocked at whoever thought a My Yahoo!-style homepage was the best layout for a bank, but props to the web developers who managed to make a mobile interface that was both pretty and allowed me to work around broken functionality in their implementations on every other platform I had access to.

But why was the mobile web interface the least bloated? Easy. On the desktop, you generally have a nice pipe, or if not, the user knows it and won't be too upset if your site is just as slow as other sites similarly situated. On mobile, the user downloaded all the code already, so the only latency should be the API requests against the server, right?

On the mobile web users have come to expect relatively speedy mobile-optimised sites and there's less screen real estate to do fancy things that get in the way of content. For many sites, that's a huge improvement. Of course, it would be really nice if more banks supported open protocols for interactions (USAA has a read-only, limited-duration OFX feed), but I would settle for a better web interface.

Posted by Luke Faraone at 00:23 No comments: